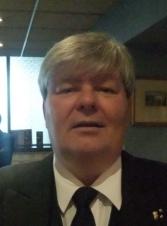 Kevin moved to the village in April 2000. He and his partner bought the Red Lion Public House and moved from Harlow in Essex to the village, to enjoy a more sedate and rural lifestyle.

During his working career, Kevin served in the Royal Air Force for 13 years as a Propulsion Technician, leaving the RAF in June 1989 he joined the Insurance Industry, where he rose to become a Lead Trainer / Designer of Computer system training including the setting up of many of the regulatory requirements for the use of systems in the Banking and Insurance Industry, he also acted as a Compliance Officer for an Actuarial practice in Manchester. He continues to act as a Consultant for Banking and Insurance Companies especially in the areas of regulation and Compliance including the GDPR regulations which are required to be incorporated into new systems. He was invited to become the National Sales Manager of a Mobility Company where his regulatory knowledge was instrumental in increasing the turnover of the business from £750,000 per annum to £2,000,000 per annum an achievement he is immensely proud of.

He joined Freemasonry in Nov 2002 and continues to be an active Freemason in the Province of East Kent.

Kevin is also acting as the Treasurer for the Canterbury and District Bat and Trap League, and also the Chair of the organising committee of the annual Bat and Trap Charity Cup, which brings together all of the Bat and Trap Leagues in Kent to raise funds for various Charities in the County.

His interests include; Cricket, Rugby Union, Bat and Trap and Reading and researching Local Village History, he is an avid reader, Wilbur Smith being his favourite author.

Kevin is a member of the following group: